You were all expecting it, right?  The only question is how I’ve held out so long… 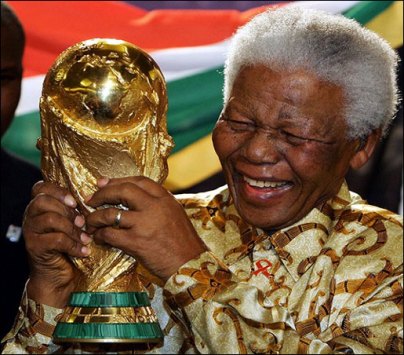 Most of you know that I think ‘football’ (that’s ‘Soccer’ to you Yanks) is one of the gayest games ever invented – and not even gay enough to be mildly entertaining.  Pansy-assed overpaid fucktards far more interested in raping women/men, drunk-driving, and spending fourteen hours a day in front of a mirror to make sure their hair looks like it’s been messed up.  All so they can do a little gay jog around on the grass before diving on the floor screaming in agony if anyone comes within ten foot of them – after which they’ll jump back up in perfect form ready to take their free kick.

As I’ve said before, they should introduce a rule like in Conkers: if anyone ever hits the deck, everyone yells out ‘STAMPS!!!” and tries to stamp on the fallen fairy.  That would stop people faking it, I reckon.

It may surprise you to find that I actually do like to watch a bit of World Cup football.  I won’t go out of my way, but if it’s on I’ll have a look.  Back in Mexico ’86 I had the sticker albums and watched as much as I could and everything, but it has dwindled a fair bit since.

One of the reasons for this is that the England football team are a bit shit.  It’s not that they can’t play – allegedly they can (just not all together as a team) – but because they’re so boring I honestly found giving blood yesterday approximately 5000% more interesting than any England game I’ve watched since the 80s.

Brazil or any strange little African or South American team are always good to watch because stuff actually happens.  The Eastern European teams are great to hear the commentators trying to say the player names (“It’s Stoyanovic to Michavic – through to Baladavic with Dinkavic on the wing!”)

True to form, England have played two of the most boring games I’ve ever seen, with boring draws against teams we should have slaughtered.  No doubt we’ll be out after playing West Congon Retarded Boyscouts FC or whoever it is tomorrow.

And the British press!  I’ve seen our poor results blamed on everything from our goalkeeper letting a goal in (Err… how about scoring more goals so we still win?) to the players being ‘bored’ between games, and even calls for the fantastic sounding Vuvuzela trumpet things that the locals blow on constantly through every bastard game.

There’s the cashing-in, too.  At the weekend I saw packets of ginger biscuits for sale – rebranded to be called ‘Goals’ and therefore in support of the World Cup!?  As I’m typing this I’ve just got an email through about a World Cup offer on warehouse crane bearings!  WTF?!

Even better are the constant programs featuring Football Expert Guests.

Now, bear in mind I think all involved in Football are retards, spastics, and thick thuggish twats of the highest order – here are the suggestions from Experts who I’ve seen on TV this week as to what the England team should do about their current poor form:

I find it very difficult to find the words without just jumping up and down whilst making spastic noises.

On the plus side, this means that with absolutely no interest in football, I too am fully qualified to be an Expert and to talk about what England should do to win.  Hell, I’ve even watched ‘Billy The Fish’ so I can probably out-Expert all these experts!  “At the end of the 90 minutes, it’ll be the team that scores the most goals who will win.”

In other breaking news I hear that “More soldiers are expected to die in the war in Afghanistan.”

So maybe I could be a fucking Military Expert, too?

First Car Insurance/F*ck You, Your Family, And All Your Family’s Pets

Today I decided to get some rough quotes to insure me as a first time driver.

I used the links to search engines from www.moneysavingexpert.com (an invaluable resource for EVERYTHING if you’re in the UK), filling in as many of my details as I could, and then sat back and waited for the quotes…

Now, bearing in mind that for a high-performance, 190mph superbike that I’ve ridden for 10 years I’m looking at £170 for fully comprehensive insurance, how much would you think an old 1 litre Fiat Uno worth around £300 will cost to insure?

If you guessed around SEVEN HUNDRED FUCKING POUNDS then you’re right.

Gee, I like you, Mr Insurance Man – you can come over to my house and fuck my sister!

For £700 I could hire a fucking limo to take me to work every day over Winter, and sip on Champagne watching the world go by without being bent over and pounded in my balloon knot by you cunts!

I hope to God none of them phone me up about the quotes.  If they do I might try and record the conversation.

So fuck all that for now – I’m just going to pass the test and then worry about it all.  I know some bike insurance companies like Carole Nash let you use your No Claims Bonus on both car and bike, so that might be worth looking at.  I’m sure there’ll be some way of getting it down, anyway…

I can totally see why so many people don’t bother getting any insurance and just risk it.

Being Driven to Distraction…

Last night I had my, umm… sixth driving lesson?  Something like that.

I make the odd cock-up, but generally it’s all going well.  I don’t really have any problems just driving around the streets, and can now do a three point turn and stuff.

I still have to try all the reversing and parking malarkey, but I just keep reminding myself that little shitty snot-nosed 17 year olds learn this shit, so it CAN’T be hard!

I don’t have a fear of the car, or of going over 10mph like most learners do.  I’m still well on track for the exam – which is good because I’ve bought a package of 22 lessons plus theory and practical tests for £550.  If I don’t use all the lessons then they’ll even refund their cost!

Brian The Instructor is cool and we’re getting on well, and more importantly we’re working well together!  I think he appreciates my laid-back attitude and sense of humour because it’s close to his own.

One thing I have noticed is that I’m starting to sympathise a bit with car drivers now.

You often hear people say how car drivers should be made to ride a bike so that they appreciate the awareness and skill it takes, and it will benefit their driving greatly.  Well, as a biker moving to cars I have to say that the opposite is also true: that every biker should be made to drive a car.

The overall impression I’m getting is that driving a car is designed to take your attention off your surroundings and off the act of driving safely.

On the bike I’m ALWAYS aware of my riding, the roads, surrounding traffic… just about everything from birds flying past to the sound of my engine.

In a car I feel like I’m sat in a big lump of heavy metal that’s tenuously controlled by me.  It doesn’t lend itself to concentrating.

I think of the lessons as a bit of a chore rather than anything I look forward to.  When I’m actually driving it’s ok, but I just can’t get excited about it all.  To me it’s a necessary evil that will allow me to carry lots of shit, take my girlfriend away places, and stop me getting killed on the snow and ice during Winter.

Super Supermarket Fuel And Why Not To Be A Skinflint

I’ve banged on about petrol for years, and how the stuff supermarkets get is inferior, dirty crap that isn’t worth the so-called ‘saving’ you make in the price over the big name brands.

There has always been strong opposition from people who say it’s exactly the same petrol that they sell, I’m being a picky snobbish twat, and even if it did make a difference I wouldn’t be able to tell.

Now I defend this by tests I’ve done using different types of fuel over the years which have shown that I get better mileage, and that far outweighs the price saving of the cheaper stuff.  I’ve found there is a hierarchy with Shell at number 1 which I think makes an audible difference (and please note here that I’m talking about high octane ‘Super Unleaded’ fuels for all of this blog – I’d rather piss in my tank than put 95 RON crap in my bikes), with BP a clear second, and Texaco and Esso following up with not so big a gain to be had.

Things could have changed – so a few weeks ago I decided to put it to the test again.  OK, so I got some fuel vouchers for Tesco and decided to use them.  Whatever.

I put 3 tanks of their finest Super Unleaded in the bike for their bargain prices.

After a few days the bike started to run like shit.  A flat spot developed low down in the rev range, which meant pulling away suffered big-time.  Then shortly afterwards several more of these flatspots started to appear higher up the rev range, showing up when I was overtaking.

The bike started to feel down on power overall.

I figured it could be a bad batch of fuel, and so put some more in.

Here I should also say that normally I’ll get 120 to 125 miles from a tank until I have to switch to reserve.  With Tesco Super Unleaded?  110 miles.

So with the second tankful in all the problems remained.  I started getting paranoid about the bike.  I know some things ARE due to be serviced, and it all continued to run like crap.  I started planning stripping the bike or paying huge bills out to let a garage do the work on the valves and carbs as I put in the third tank of Tesco’s fuel…

Results were the same, so I was feeling a bit meh even as I finally switched back to Shell V-Power fuel last night…

Well bugger me if all the flat-spots haven’t disappeared!

The bike is back to running smoothly and perfectly, starting much easier, and just generally being better!

The price difference is around 10p per litre extra, but with a 17 litre tank it’s hardly worth crying over, is it?

I haven’t tested the mileage I’ll get yet, as I only filled up last night, but I’m 100% sure already that it will be much better once again.

In conclusion – suck my bawbag if you think supermarket fuels are the same!  They’re inferior cheap shit and will end up costing you more than the so-called ‘expensive’ fuels, if not in mileage then in servicing!

Don’t bloody use them!