Bring that dog log
To your eyes
Give your Mom a nice surprise!

Thus was spake (is that a word?) by The Stupids in their song that none of you will have ever heard, “Dog Log”.  And now this is my Dog Log Blog.

It may surprise you (not as much as the above Mom!) that I’m not going to bang on about why dog poo isn’t white anymore, like it was back in the early eighties and before.  I believe that was to do with calcium content of pet food, but if I’m wrong then ‘meh’.

When I were a Whipper-Snapper, the threat of treading on a dog log was ever-present.  I wasn’t always the hyper-coordinated Ninja that I am today, and often managed to find these messy little packages.  Not like my brother – even today if there is ANY dog poo within a 10 mile radius he will somehow find it and step in the damned stuff!

I did go one better once, though.  Whilst out playing (with my brother amongst others, strangely enough, the bloody Jonah!), I fell over and of course my bare naked hand found the cold squidgy lump of what to be honest was more like a cow pat than anything a dog would have done.  Nice.

After taking in the initial shock, I decided that the best course of action was to try my best to share the good news with my playmates.  Sadly, they all ran faster than ever before, and I had to take my good news back to my Mum to clean up instead.  I say this happened once, but I have a suspicion that this happened twice…

Not long after this they started to bring in the ‘Curb Your Dog’ laws, where you had to shove your dogs arse over the edge of the curb to do their business in the gutter.  You can imagine how this pleased anyone in the car tyre trade.  And probably got some people and dogs squished by buses.  It was not successful…

So the general fines came in for people who didn’t ‘Scoop The Poop’ and pick up their dog logs as soon as they were created.

This was heavily enforced and not picking up your dogs poo actually became frowned upon by the rest of society, and so was a great success meaning that an entire generation of kids probably missed out on the feel of squidgy poo between their digits.

[I’m having to post this blog from work.  When the only illustration that this REALLY needs is a big steaming pile of dog shit, this poses the problem that my Cow-Orkers will think I’m even more weird than I am if I sit here searching on Google Images for filthy piles of turd.  So one will appear here later.] 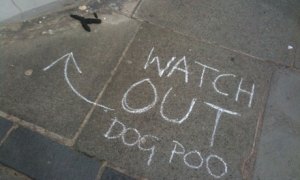 So what the Hell has happened lately?

All of a sudden the pavements are loaded with doggie dookie again!

Has the law been withdrawn?  Have people suddenly decided that they don’t mind stepping in shit again?

And I’m not just talking the quick chipolata that a Chihuahua might have snuck out whilst nobody was looking – I’ve seen loads that could have won World Wars if you dropped them out of a Junkers JU-88!

Are you turning a blind eye to it?